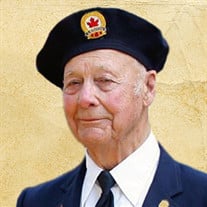 It is with heavy hearts we announce the peaceful passing of Tom Robson on December 7, 2017 at 94 years of age. Beloved husband of the late Clara (nee Fougere-2007). Loving father of Tim (Marj) Robson, Marlene (Terry) Coote, the late Ron Robson (2016) and the late Larry David Robson (1949). He will be sadly missed by his daughter-in-law Judy Robson and many thoughtful caring friends. Son of the late Angus and Charlotte Robson. Treasured grandpa of David (Melissa), Carrie (Bill) Deehan, Tom, Jim (Nicole), Jessica, Chris, Carla, and Carmen Coote. Great-grandpa of Jessica, Connor, Blake, Jack, Ava, Colin, Lainey and Emmett. Predeceased by his brothers and sisters; Clarence, Alvin, Eldred, Albert, Leslie, Beverly, Ida and Eleanor. Lovingly survived by many nieces and nephews. Tom enlisted in the Canadian Navy on May 6, 1941 and served as a Petty Officer in World War II. He was discharged on December 11, 1945. Tom was also a dedicated member of the Royal Canadian Legion Branch # 201-Essex since 1942. He has been a member of the Knights of Columbus for 67 years and a long-time member with the St. Vincent de Paul Society. He retired from Chryslers with 30 years of dedicated service. Recently Tom was honoured as the Citizen of the Year in Essex for his years of exemplary service to our community. Tom was a wonderful volunteer in every sense of the word. As well, he was a loving father, grandpa and friend to all who knew him. Tom is resting at the Kennedy Funeral Home Ltd. (519-776-7378) 128 Talbot St. N, Essex on Sunday from 7-9 p.m. with a Legion service at 7:30 p.m. Visitation continues Monday from 2-5 and 7-9 p.m. Parish, K of C and St. Vincent de Paul prayers Monday at 7:30 p.m. On Tuesday, friends are invited to meet the family after 9:30 a.m. at Holy Name of Jesus Parish (146 Talbot St. S., Essex) followed by the Mass of Christian Burial at 10:30 a.m. Interment Greenhill Cemetery, Kingsville. Donations may be made to the Heart and Stroke Foundation. You may send your cherished memories or condolences online at www.kennedyfh.com

The family of Tom Robson created this Life Tributes page to make it easy to share your memories.

It is with heavy hearts we announce the peaceful passing of Tom...

Send flowers to the Robson family.