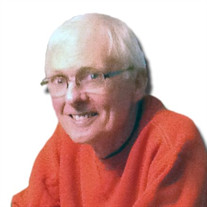 (December 12,1941-August 20, 2014) It is with profound sadness we announce the passing of Jim quietly at home surrounded by family after a short journey with cancer. Jim was born in Toronto to parents Margaret Penn (2005) and Bernard Cannon (1986). Jim attended McMaster University where he played goal for the 1963 Championship McMaster Marlins and where he became the first Marlin to be inducted into the McMaster Sports Hall of Fame for hockey in 1985. Choosing to pursue his academia, he left Ontario to attend the University of Washington to obtain his Doctorate. This is where he met and married Christine Jenner. They made a life in Kingston where he accepted a position of professor of Geography at Queen's University. Although the marriage ended, they have remained long lasting friends. In 1979 Jim met and married an Essex County girl (widow) Linda (Adams) Queen and along with her two young children they settled into Jim’s life in Kingston. Jim was an active participant in many special interests and groups in his 45 years in Kingston where he made many enduring friendships. Some of which include: Cataraqui Oldtimers, Church Athletic League (CAL), Kingston Minor Hockey Assoc., Kingston Yacht Club, Portsmouth Villagers Assoc., Laidlaw, and the Marine Museum of the Great Lakes at Kingston, Alberg Assoc. After 35 years of love, support and guidance he leaves behind his devoted wife Linda, his children, Todd Queen (Tina) and Tanya Queen, his loving grandchildren Morgan Queen and Ty Queen. He is fondly remembered by Christine Cannon (Virginia Wakeford), his cousin Phil Stoegerer (Joyce), all of his brothers-in-law and sisters-in-law, many nieces, nephews, family and friends. Special thanks to Windsor Regional Hospital Cancer Centre, the Hospice of Windsor, CCAC, ParaMed, Bayshore, Revera, all of the Doctors and nurses in charge of his care. Cremation has taken place. On Monday August 25, 2014, friends are invited to gather at the Royal Canadian Legion Branch # 201 (103 Talbot St. North, Essex, Ontario) from 3 p.m. to 8 p.m. for a celebration of his life. A memorial service will be held in Kingston at a date to be determined. In lieu of flowers, donations may be made to the Hospice of Windsor & Essex County, the Windsor Cancer Centre Foundation or a charity of your choice. Arrangements entrusted to the Kennedy Funeral Home Limited (519-776-7378) 128 Talbot St. N, Essex. You may send your condolences online at www.kennedyfh.com Click HERE to donate to the Hospice of Windsor http://www.thehospice.ca/make-a-donation Click HERE to donate to the Windsor Regional Cancer Centre http://donate.windsorcancerfoundation.org/donate

(December 12,1941-August 20, 2014) It is with profound sadness we announce the passing of Jim quietly at home surrounded by family after a short journey with cancer. Jim was born in Toronto to parents Margaret Penn (2005) and Bernard Cannon... View Obituary & Service Information

The family of Mr. James Bernard Cannon created this Life Tributes page to make it easy to share your memories.

Send flowers to the Cannon family.