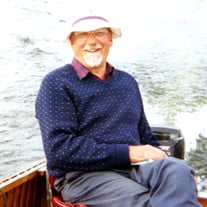 Doug was finally released from the bleak cage of dementia on August 27th. As Dylan Thomas advised, he did not “go gentle into that good night,” but “raged against the dying of the light.” Survived by his wife of 61 years, Gail; daughter Jill (and Doug’s best friend Dan Pouget); daughter Jennifer Luxon (Chris); son James (Barbara). Also survived by four grandchildren: Stephanie and Michael Gazzola, Jessica and Alex Grant; one great-grandchild: Hannah Gazzola; and good friends, Clarence and Jackie Pouget. Predeceased by mother, Lois, and sister, Bettye. Born in Chatham in 1926, Doug graduated from Western University (then UWO) medical school. He practiced dermatology in Kitchener while also maintaining an interest in his community and broader medical issues: as President of the K-W Academy of Medicine and the Waterloo Rotary Club, and as a delegate to the Ontario Medical Association and the College of Physicians and Surgeons, becoming president of the College in 1974. After Doug closed his practice in 1985, he and Gail moved to Bayfield, ON, where he worked as a consulting dermatologist for a number of hospitals. He continued his interest in community by serving on the Architectural Conservancy Board and acting as Councillor, then Reeve, of the village of Bayfield before fully retiring. A life well-lived: Doug’s personal and professional life was marked by integrity and a consistent concern for health care issues. The angels of Iler Lodge in Essex Ontario reflected the same ideals of integrity and concern in their care of Doug (and others) as his life waned. Doug’s family thanks them for their compassion. Cremation has taken place. Family, friends and angels are welcome to join in an informal gathering at the Kennedy Funeral Home Ltd. (519-776-7378) 128 Talbot St. N, Essex on Thursday, August 31, 2017 from 1-3 p.m. If you wish, donations may be made to the Pioneer Park Association in Bayfield, Ontario. You may send your condolences online at www.kennedy.com Donate online to the Pioneer Park by clicking the link below: https://www.canadahelps.org/dn/11433

The family of Douglas James Grant created this Life Tributes page to make it easy to share your memories.

Doug was finally released from the bleak cage of dementia on...

Send flowers to the Grant family.