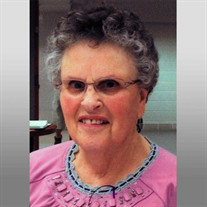 (nee Malenfant) It is with extreme sadness we announce the passing of our beloved mother, grandmother, great-grandmother at the Erie Shores Healthcare in Leamington on May 4, 2020 at 92 years of age. Loving wife of the late Harold (1994). Dear... View Obituary & Service Information

The family of Bernadette Mahon created this Life Tributes page to make it easy to share your memories.

(nee Malenfant)
It is with extreme sadness we announce the passing...

Send flowers to the Mahon family.