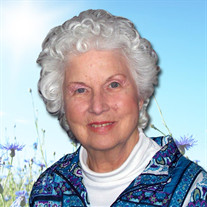 (nee Belleau) Passed away peacefully at Royal Oak LTC in Kingsville on May 28, 2018 at 91 years of age. Beloved wife of the late Victor Dunn (2009) for almost 59 years. Predeceased by her parents Frank and Millie Belleau. Loving mother of Francis and Terry (Fortin), Diane Borland, Victor Dunn and Debbie Fowler, Gloria and Pat Van Den Driessche, Randy and Pam (Strahl), Irene and Yvon Audette, Mary and Silvano Bertoni. Cherished grandma of Angela (Gary) Butler; Francis Daniel, Joshua, Sarah Dunn; Rob Borland (Daria), Brad Borland; Amy (Chris) Tucker; Kim, Katie (Raul) Dunn; Tim (Lisa) Van Den Driessche; Tamara (Charles) Ducharme; Krista (Chad) Carnegie; Trever (Hannah), Chad, Julie Dunn; Andre, Jonathan (deceased), Richard, Paul (Brittany) Audette; Demitri, and Orianna Bertoni. Great-grandma of Ryan, Allison and Ava Butler; Victor Michael, William and Alexander Borland; Abigail Tucker; Rafael Martinez-Dunn; Benjamin and Graham Van Den Driessche; Henrik and Madalayna Ducharme; Kian and Austen Carnegie; Ryker and Violet Dunn. Sister of the late Ella Mae Markham, Bernard Belleau, Leo, Fred, Don, Wilfred and Ray Belleau. Sister-in-law of Terry, Carol Hrycay, Linda Marentette and Carol, Diane, and Ruth Dunn and the late Glenn, Leon, Bill, Ella and Ron. Also missed by many nieces and nephews. Aurelia was our precious gift from God. She honoured her parents and spoke with the highest regard for them both. She loved her husband Victor and worked hard beside him, to raise 7 beautiful children in a ship shape house. Aurelia had flair. She was creative; taking courses in cake decorating, sewing, and oil painting. She enjoyed colour and style, and classy suits and cute shoes too. Church was always a big part of her life. Aurelia set on a quest for answers from God, while some of her dear family members were suffering with cancer. During this search she became a born again Christian. Aurelia began to change and soften. She grew into a beautiful Christian woman. Her love for God and concern for her family kept her and Vic on their knees in fervent prayer. Aurelia was a true friend and wonderful counselor. Even in days when Alzheimer was robbing her cognitive skills, her perception stayed keen, and her common sense was alive and well. She was a prayer warrior. Aurelia loved music, and loved to sing. Many hours were spent travelling with her and Vic singing, during vacation time. When sadness, or fear set in later in her life, she still had a listening ear and would respond to many hymns with a tapping toe and a smiling response of “that is beautiful.” Aurelia and Vic enjoyed watching their grandkids play baseball. Her biggest fear after Vic passed was that she would forget her grandchildren. Alas this did happen. She forgot her seven children, 21 “grands”, and all of her “greats” … but she recognized when she would hear the squeals of delight in the room, that they were precious. She was always a Mom, concerned that no one would get hurt. When people surrounded Aurelia with love and kindness she would simply tell them “I love you.” Her world had changed, but her family simply grew bigger. We love you Mom. You will always be cherished in our hearts and remembered with fondness by all of your family and friends. May Aurelia see our Heavenly Father clearly and be filled with great joy in the presence of her Savior Jesus… and we know Dad was waiting to share a slow dance with her on the clouds. Aurelia is resting at the Kennedy Funeral Home Ltd. (519-776-7378) 128 Talbot St. N, Essex on Thursday 6-9 p.m. On Friday, friends and family are invited to gather at Holy Name of Jesus Parish (146 Talbot St. S, Essex) after 9:30 a.m. followed by the Mass of Christian Burial at 10:30 a.m. Interment to follow at St. Mary’s Cemetery, Maidstone. Donations may be made to the Alzheimer’s Society or to Compassion Canada (PO Box 5591, London ON, N6A 5G8) You may send your condolences online at www.kennedyfh.com

(nee Belleau) Passed away peacefully at Royal Oak LTC in Kingsville on May 28, 2018 at 91 years of age. Beloved wife of the late Victor Dunn (2009) for almost 59 years. Predeceased by her parents Frank and Millie Belleau. Loving mother of Francis... View Obituary & Service Information

The family of Aurelia J. Dunn created this Life Tributes page to make it easy to share your memories.

Send flowers to the Dunn family.